5 Nigerian Celebrity Couples Who Got Married In 2020 (PICS/VIDEO) 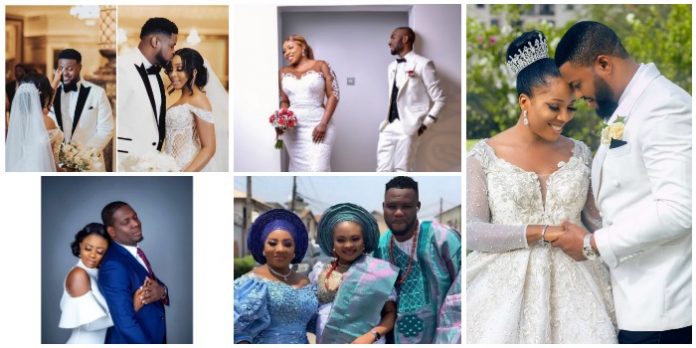 When a celebrity is getting married in the Nigeria entertainment industry, they usually get full support of their colleagues. There is always urge turn-up of celebrities at such weddings.

While some of these celebrities may decide to keep their wedding ceremonies from the public, some celebrities like grand style weddings with high class that will be the talk of the town.

In this article, we will be looking at 5 Nigerian celebrity couples who got married in 2020. 3 of them had grand style weddings with many celebrities in attendance while the other 2 couples had low key weddings. 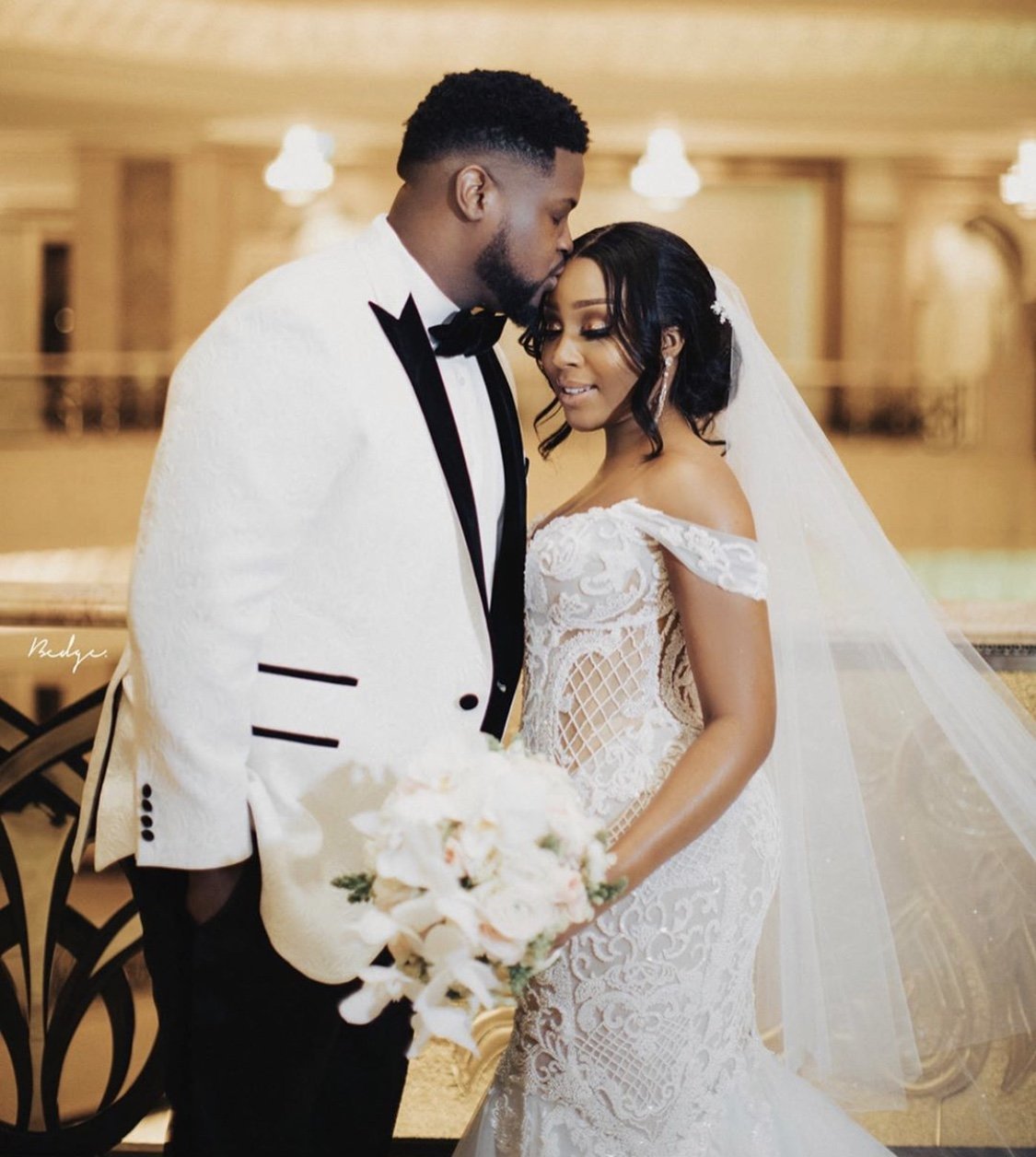 Adewale Adeleke popularly known as ChairmanHKN, is the elder brother to popular singer, Davido and son to Nigerian billionaire, Adedeji Adeleke. He was born on December 11, 1988 in Atlanta, Georgia, USA.

Adewale Adeleke is a songwriter and businessman. Having obtained a degree in Business Administration from Pacific Union College, he decided to relocate to Nigeria in 2010. He also owns a record label HKN Music as he produced an album titled ‘Omo Baba Olowo’ in 2012.

Adewale Adeleke was appointed by his father as the Executive Director of Energy Company Pacific Energy in 2015.

Kani Ekanem Adeleke, the wife of Adewale Adeleke, is a Master’s degree holder of Physiology and Biophysics which she studied at Georgetown University, Washington DC, USA.

Adewale Adeleke proposed to Kani Ekanem in July 2019. They did their wedding introduction on December 8, 2019 at the bride’s family house at Calabar, Cross River State. Their traditional wedding took place on December 13, 2019 in Calabar.

These celebrity loverbirds’ white wedding held on February 3, 2020 in Dubai which had prominent Nigerian billionaires and celebrities in attendance.

This wealthy celebrity couple after their glamorous wedding, toured for an exotic honeymoon to different eye-pleasing locations such as Jumeirah Vittaveli in Maldives Island, Indonesia, Island of Bali, etc.

Adewale Adeleke and his wife, Kani is living a fascinating couple life with high class as they are affluent. They are such a happy celebrity couple.

Sandra Ikeji is a sister to popular Nigerian Blogger, Linda Ikeji. The Ikeji family is one of the popular families when we talk about entertainment in Nigeria. Most of the Ikejis are doing well for themselves in the entertainment industry.

Sandra Ikeji married her heartthrob, Arinze Samuel in a grand style white wedding attended by many dignitaries from far and near on January 11, 2020 in Lagos. It was a world record breaking wedding as Sandra Ikeji had over 200 bridemaids in attendance which was her dream wedding.

These amazing personalities are both celebrities. Anita Joseph is a Nollywood actress which gained attraction because of her big backside. She is also a singer and television personality. Anita Joseph was born on January 4, 1985 in Anambra which is her state of origin. 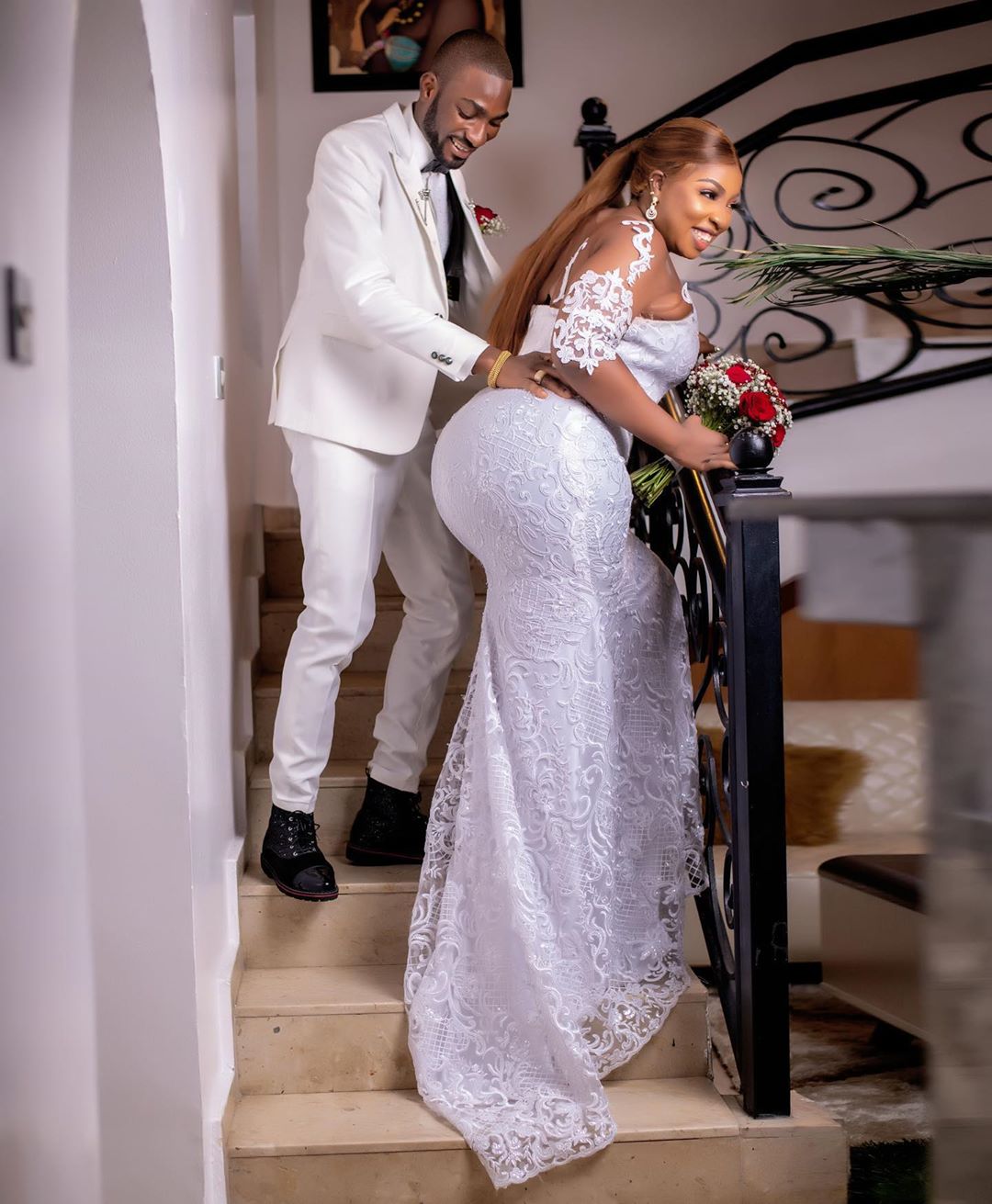 Anita Joseph studied Mass Communication at University of Calabar. She came into the limelight with the role, Sandra she played in a movie titled ‘Tears In My Heart’ in 2006. She has featured in several Nollywood movies since then which include ‘Open and Close 1&2’, ‘Tears In My Heart 2’, etc.

MC Fish with the real name Fisayo Michael Olagunju, is a celebrity hypeman, master of ceremony, actor and comedian. He started his career around 2013-2014. According to MC Fish, his biggest show was the Hennesy Artistry in 2018. 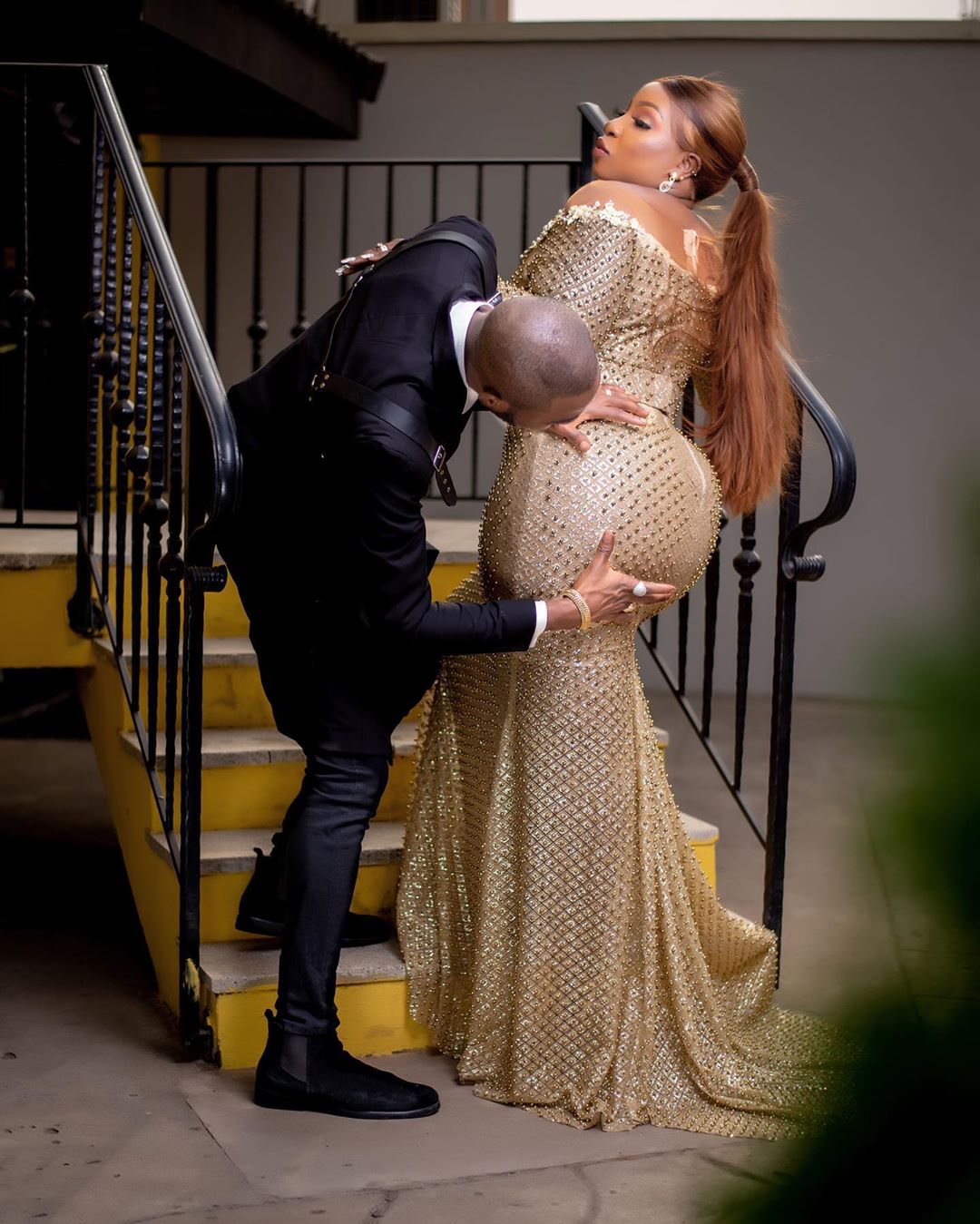 Anita Joseph and MC Fish met on June 8, 2017 which led to a romantic relationship for almost 3 years before they finally tied the knot on February 14, 2020 in a private wedding in Lagos. This couple never cease to flaunt their love life to the public as they always share loved-up photos and videos of them together on their social media pages 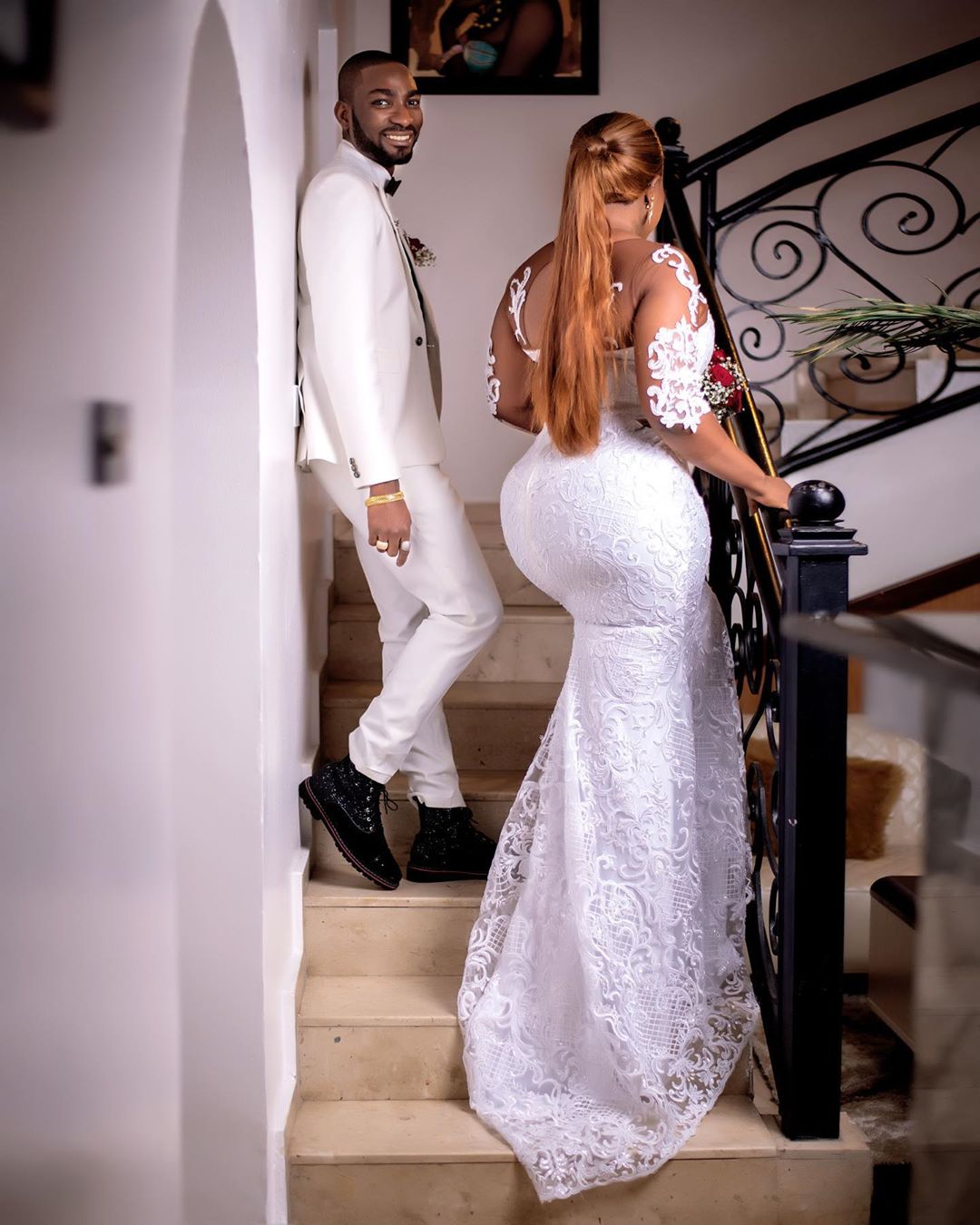 Their love continues to grow stronger day-by-day as they are fond of each other and do things together especially during the COVID-19 lockdown. They also support each other’s career. Anita Joseph and MC Fish are such a couple with genuine love.

Kayode Adebayo is the CEO of K+ Media Concept and an anchor of a TV program tagged, ‘Made In Naija’.

Kayalubarika tied the knot with his heartthrob on March 7, 2020 in a glamorous wedding in Lagos which was attended by several Yoruba Nollywood stars like Mide Martins, Adedimeji Lateef, Allwell Ademola, Kunle Afod, Afeez Abiodun, Salami Olurotimi, Fathia Balogun, to mention a few.

Not much is known about Kayalubarika’s wife as she lives a private life. And the lovely couple have been enjoying their marital life.

This fast-rising actress got married to the love of her life, Adeyemo Olalekan on March 19, 2020 at Ikoyi Registry, Lagos at the wake of the COVID-19 pandemic in Nigeria. The loverbirds did their wedding introduction in December 2019.

Seilat Adebowale’s husband, Adeyemo Olalekan popularly known as Pojuspeaks is a graduate of Electrical and Electronics Engineering from Covenant University. He proceeded to University of Ibadan for a Master’s degree in Engineering Management which he completed in 2019. He is currently working at Huawei Technologies Company Nigeria as a project manager.

What do you think about these lovely celebrity couples?