Funke Akindele, a Nollywood actress and film maker, confirmed that she went under the knife after a fan sent her a powerful message revealing that she was not going to make it alive.

This came after John Omoarukhe, took to Twitter to advise the actress not to undergo some kind of surgery.

However the actress replied, claiming that she had already undergone surgery.

”@funkeakindele good morning ma. Jesus loves u. Please don’t be offended for I have a message for you. Do not undergo any surgery for the lord said you will not make it. To obey is better than sacrifice 1sam.15 bs 22 and jer.7 vs 23. God bless you as u obey. Thanks.”

“I don do am already” 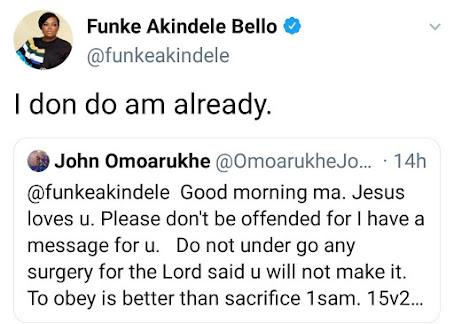