SHOCKER! Families Of Those Who Lost Their Lives In Lekki Massacre Finally Speak To CNN | See Tragic Stories!

The person on the other end of the line — a stranger — broke the news that Ibanga’s brother, Victor, had been shot dead at the Lekki Toll Gate, in Lagos, Nigeria, where he had been peacefully protesting against police brutality earlier that night.

“The person told me that the police took his body away,” Ibanga, 24, told CNN. An eyewitness to Victor Sunday Ibanga’s death told CNN the 27-year-old entrepreneur was shot in the head during the protest.

CNN obtained and geolocated a photograph of Victor’s body lying in a pool of blood and wrapped in the white and green of the Nigerian standard — one of the same flags gripped by fellow protesters earlier in the evening as they sang the country’s national anthem. Ibanga confirmed the photograph is of his brother.

The Ibangas are one of several families yet to locate the bodies of their missing loved ones — protestors at the toll gate — who dozens of eyewitnesses say were shot at, first by members of the Nigerian Army and then hours later by police. Eyewitnesses told CNN they saw the army remove a number of bodies from the scene.

What happened on October 20, and into the early hours of October 21, at the eight-lane Lekki Toll Gate — a key piece of Lagos’ road network — has stunned the country.

The protesters, who were present have told CNN it was a “massacre” with multiple people killed and dozens wounded. But local authorities have downplayed that account.

Lagos State governor, Babajide Sanwo-Olu, admitted to CNN that footage showed uniformed soldiers firing on peaceful protesters but claimed only two demonstrators were killed. But, he then said there was “not a scratch of blood” at the toll gate when he visited. The governor said no families had approached authorities saying they were missing relatives.

In the immediate aftermath of the shooting, the army denied any involvement, describing reports of the incident as “fake news,” before backtracking and saying that soldiers were present but fired their weapons in the air and used blanks, not live rounds. 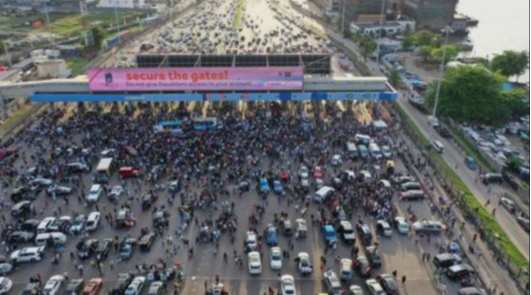 CNN’s calls to the Nigerian Army have not been returned. But on November 14, during a judicial inquiry into the shooting, army representative, Brigadier Ahmed Taiwo, said, “There’s no way officers and men will kill their brothers and sisters. I repeat no way. We have those who constantly seek to drive a wedge between us and between the citizens of Nigeria…“

The army also said at the hearing that it was the governor, who called soldiers to the scene because the police were overrun. The governor has denied this, saying he does not have the authority to call in the army. The army has continued to restate that they did not fire live rounds.

But an investigation by CNN into the disputed events has cast doubt on authorities’ shifting and changing statements.

Evidence of bullet casings from the scene match those used by the Nigerian Army when shooting live rounds, according to current and former Nigerian military officials. Verified video footage — using timestamps and data from the video files — shows soldiers, who appear to be shooting in the direction of protesters.

And accounts from eyewitnesses establish that after the army withdrew, a second round of shooting happened later in the evening. Since Elisha Sunday Ibanga learned of his brother’s death, he has been visiting hospitals in a desperate search for his remains.

“My mother, my sisters, all my family are in prayer, just to see if we can find out and know where my brother’s dead body is,” he said. The bodies of other protesters are nowhere to be found. 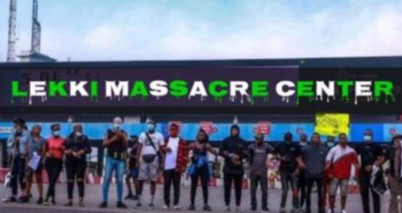 Peace Okon, 24, hasn’t seen her younger brother Wisdom, 18, since he went to the protest the night of the shooting. “He just came back from work on that Tuesday, ate his food and went there,” Okon told CNN.

She started worrying when he didn’t arrive home that night. By the next morning, Okon was out searching for him. “I’ve gone to hospitals, I’ve gone to police stations, I’ve gone to everywhere. I can’t find him,” she said.

Her brother had only moved to Lagos a few weeks before the protest — Okon had helped him find a job as a cleaner at a bank. She says he didn’t know anyone at the protest and had never been to one before.

Okon said she wants the Nigerian authorities to tell her if her brother is alive and detained or dead.

The shootings at Lekki Toll Gate followed weeks of “#EndSARS” protests against police brutality that had burst onto the streets of cities across Nigeria.

For almost a fortnight, thousands of young Nigerians mostly under 30 — a demographic that makes up 40% of the country’s population — protested, with calls for an end to the Special Anti-Robbery Squad, a police unit widely and repeatedly accused of kidnapping, harassment and extortion.

Police had agreed to disband the controversial unit but protests continued. It would be the fourth time it was being disbanded.

There were peaceful marches, candlelight vigils, multi-faith prayer sessions and DJ performances that attracted backing and solidarity from celebrities, the Nigerian Diaspora and supporters around the world. 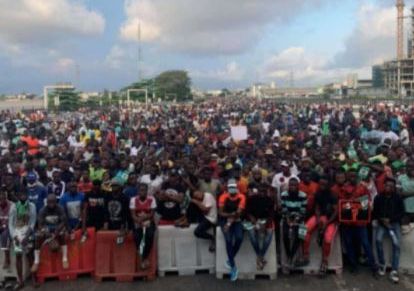 The movement quickly widened beyond police brutality to other grievances — capturing the frustrations of a young population demanding an end to bad governance in the oil-rich country.

Lekki, a relatively affluent suburb of Lagos, and the toll gate became a focal point of the movement.

However, about 10 days into the protests, the demonstrations were hijacked by “thugs and sponsored hoodlums” who attacked protesters, causing deaths and injuries, according to Amnesty International Nigeria.

In response, on October 20, hours before the shooting, Governor Sanwo-Olu imposed a strict curfew starting at 4pm following looting and vandalism in other parts of the state.

PEOPLE ALSO READ  Man dumps bride on wedding day after dating for 10 years, planed wedding for 3 years and spent N7m on the wedding

It was later moved to 9pm to allow commuters to get home. The timeline for when the curfew was imposed has become a point of contention between the governor and military.

The army said their soldiers were unaware of the change to the later time, according to the army spokesperson’s testimony to the eight-person judicial panel on November 14. For 24 hours, only essential service providers were to be allowed on the streets of the 20-million strong city.

Testimony from dozens of eyewitnesses and family members interviewed by CNN and a forensic examination of hours of video and dozens of photographs captured before, during and after the two shooting incidents show how a fledgling protest movement was all but extinguished by the very thing Nigerians were demonstrating against.

Less than three hours after the original curfew time came into effect, army trucks left the Bonny Camp barracks on Victoria Island and headed towards the toll gate plaza and the protesters, according to videos reviewed by CNN.

Meanwhile, we will like to hear from you. Feel free to share your thoughts with us in the comments section below.

It Won’t Wipe Away Your Mother’s Sin – Netizen Attacks Lily Afegbai After Flaunting Her $22,000 Birkin Bag