The tallest man in Nigeria, Afeez Agoro Oladimeji has opened up about his life and the challenges he has had to face over being extremely tall. He stated that finding love has been difficult for him as most ladies run from him. He however revealed that he has a special woman in his life now and they plan on getting engaged soon. While it is believed that most ladies have a thing for tall guys, it appears this is not the case as confirmed by Afeez Agoro Oladimeji.

Unofficially regarded as the tallest man in Nigeria, the man who stands at a towering 7ft.4 inches is indeed a sight to behold. However, while living under the spot light may have brought good things into his life, it appears finding true love is not one of them. In a recent interview with The Nation, he revealed that it has been difficult finding a woman to spend his life with.

He revealed that it wasn’t easy finding a woman who liked him enough to stay. “Many ladies run away from me as a result of my height, so finding a wife, for a long time, was tough,” he recalled. However, all that is in the past as he has found the one meant for him, his special someone. “She was one of my fans. She came to me and said she wanted to be my friend and during that process, I proposed to her and she accepted. We are planning our engagement soon.”

Just as love was difficult for him to find, finding his shoe size in the market has always been difficult as well. Oladimeji who wears a size 53 revealed he finds it difficult to get his shoe size and even his clothes size in Nigeria. Getting a job initially was also difficult for the 44-year-old. After completing his NYSC in Bayelsa, Oladimeji returned to Lagos to seek for a job but was repeatedly turned down. 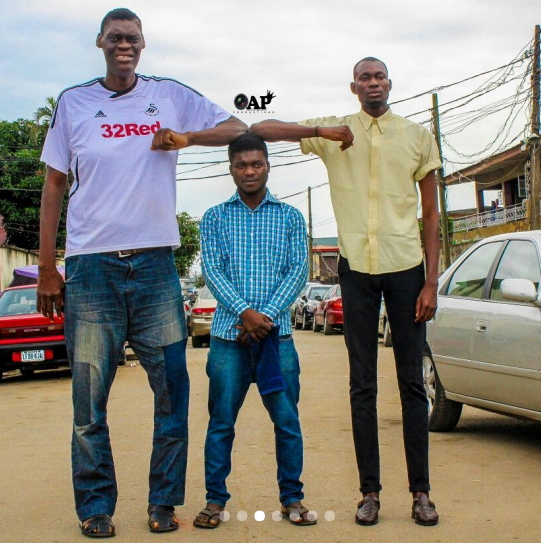 “I only got a two-year contract job with the Lagos State Government because it was difficult for me to get a regular job, even though I had the qualification and could excel. They turned me down because of my height. Today, I am into business, buying and selling and my customers have been very supportive. I also do modeling and I’m into entertainment,” he revealed.

Beyond the job issue, Oladimeji also has challenges moving around. “Some years ago, I had a jeep that I took to a panel-beater to help adjust the seat, so it would be convenient for me to drive.” According to him, since the vehicle packed up, he has had to rely mostly on commercial motorcycles to cover short distances or Uber taxis, whose charges are telling on his resources. When asked if there is any government support for people like him, he had this to say: “None. I once visited the Lagos State Tourism Board and they promised to make me Tourism Ambassador in Lagos, but they’re yet to make good that promised. Government is paying little attention to the creative industry. If I am the tallest out of 200 million people, then I should be celebrated and supported.”

1 thought on “Nigeria’s tallest man, Afeez Agoro speaks on challenges he faced as a result of his height, takes picture with Odunlade Adekola and Other Celebrities(PICS)”