Actress Ronke Odusanya Allegedly Wrecks The Life Of Her Baby Daddy Financially, Drags Him To Court.

There are rumors that the actress Ronke Odusanya and the daddy of her girl, Jago, are not all right.

Media reports circulated through Gistlover (an Instagram blogger) say that the actress, with the aid of Barrister Festus Keyamo, is fighting for her daughter’s sole custody.

In order to stop her estranged lover going anywhere near her and the baby, Ronke Odunsaya is also seeking a restraining order. 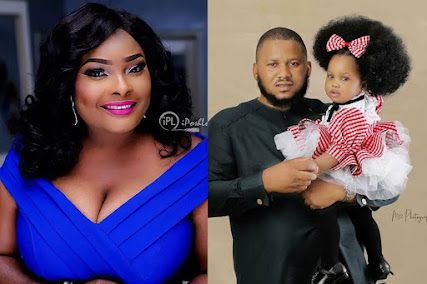 The Yoruba movie star was said to have coerced Jago, so he sold 3 out of his 4 cars to pay her bills.

“Trouble started when their daughter wanted to celebrate her 1st birthday,Ronke requested for millions of Naira  from her baby daddy and told him that she is a celebrity and she must celebrate the birthday in a very big way,the guy had to sell one of his cars worth 12m for 4m and and gave Ronke the 4m of which Ronke didn’t end up celebrating any birthday,” the report reads.

In addition it was also revealed that Ronke advised Jago to sell his house worth 90million in order for her to set up a big, classy business but Jago’s mother prevented her from achieving her goals.

“The mother refused to release the document saying Jago already sold all his properties including lands and this is the last property. He will help the guy secure it with her last blood,the reason for asking him to sell the house is because according to Ronke, she wants to level up to Mercy Aigbe and co because she said they all have a studio now where They keep all their equipment and they don’t need to rent whenever they want to shoot,they can also rent out the equipment to others who don’t have,she requested 65m for  her to set up the said studio,the mother refused to release the document to the house and said her son is under Ronke’s charm. Ronke has since been threatening the guy with Festus Keyamo and EFCC, saying she knows people in Lagos and will make EFCC come for the guy unto say Na Yahoo Yahoo be the guy,” Gistlover wrote on Instagram.