The State Commissioner for Internal Security and Home Affairs, Samuel Aruwan, who confirmed this in a statement on Sunday, said the bandits opened fire on motorists on Saturday, March 20, and killed a driver identified as Danladi Maisamari Udawa.

In another incident, a 30-year-old herder, Yakubu Aruwa was also killed while grazing his cattle between Gora and Ungwan Pa area Zangon Kataf LGA.

According to Aruwan, the victim was grazing with another herder, one Muhammadu Sani, who escaped the assailants, while Yakubu Aruwa was overpowered. The carcasses of three cows were recovered, with another three reported missing.

Furthermore, troops of Operation Thunder Strike rescued an abducted boy, 15-year old Doti Haruna, one of four boys abducted by bandits from Katambi, Kachia LGA. He was rescued by the troops during a patrol to Alewa village in the same LGA.

The rescued boy revealed that another boy, Abdullahi Babale, was released. Both boys have however been reunited with their families.

This now places the total casualty figure from the attack at 12 persons, as against the 10 indicated in initial reports. Also, a total of 74 houses have been confirmed razed, as against 56 initially reported.

Aruwan said Governor Nasir El-Rufai prayer for the repose of the victims’ souls, and commiserated with their families. He also wished the injured victims a quick recovery.

The Governor also condoled the family of Yakubu Aruwa and reiterated that reprisal is not a viable solution to any grievance.

“The killing of the herder, according to security agencies is linked to an earlier killing of a farmer, one Irmiya Godwin, who was killed by last week after working in his farm in Gora Gan general area.” the commissioner added.

Meanwhile friends of the late Danladi have taken to Facebook to mourn his death. See posts below… 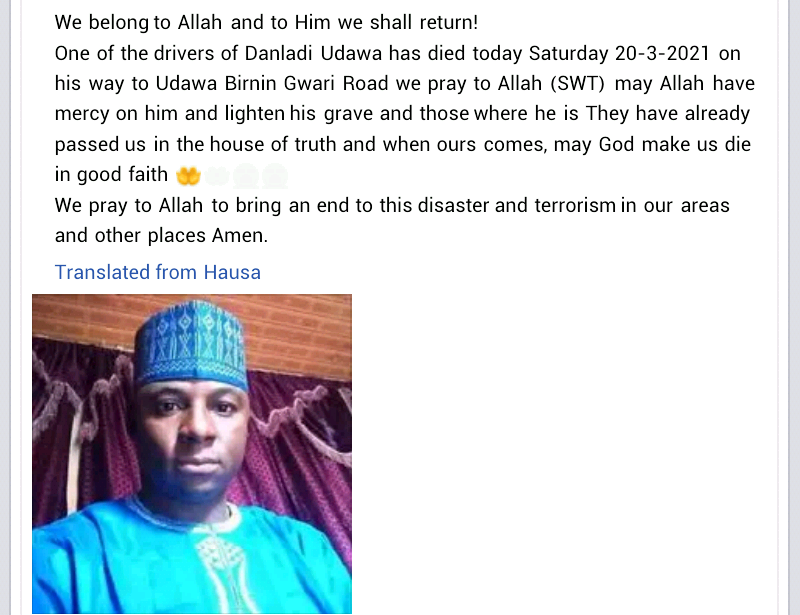