Not many people know how to make it and fake it. Being loud is their lifestyle as they bask in luxurious things of life – where ever they go, you find their footprints in the sands.

Below are three of the loudest billion-naira Nigerian youths, who are worth a combined N48 billion, you should know – or already know!

If you Google Cubana Chief Priest, you will see him in pictures sitting behind bundles of cash or dressed in Versace robe, sitting on glod plated luxury bed – yeah, that’s Pascal Chibuike Okechukwu.

Chief Priest’s popularity in the social circle in Nigeria could be linked to the famous Nigerian club, Cubana Nightclub, which he manages for Obinna Iyiegbu.

Although the 40-year-old Imo State born has resigned from his role at Cubana, he has gone on to establish his own nightlife business, Club Xhrine.

Okechukwu owns a Toyota Land Cruiser that cost about N33 million, and his garage also reportedly houses Range Rover and a Ferrari which is valued at about N104 million, including a Chinese model Geely X7 worth N13 million.

Born in 1981, Emeka Okonkwo has carved a name for himself in the entertainment industry and social circle, through his alias, E-Money – and this isn’t just an ordinary moniker, it’s a description of his luxurious lifestyle.

He also draws wealth from Five Star Group, which produces made in Nigeria products ranging from tomato paste, mackerel in tomato sauce, coconut milk, as well as sweet corn.

The firm is also into oil and gas business. But that’s not all, as E-Money’s streams of income include those from his import and export business, Emy Cargo And Shipping Services Nigeria Limited.

But E-Money is not your regular Aliko Dangote-kind of businessman. Okonkwo oozes the money he makes through his extravagant lifestyle, living in N250 million mansion in Omole Estate, Ikeja, Lagos, riding in N30 million worth Mercedes Benz Sprinter and N37.04 million armoured 2017 Lexus LX 570 Jeep.

He’s also popular at social events, buying out tables at comedy shows and music concerts. Although there are no official networth of the Ajegunle-born businessman, E-Money’s fortune is purportedly N1.5 billion ($3.64 million).

In recent times, when a Nigerian hear Oba, the two names that comes to mind are either ‘king’ or ‘Obi Cubana’ – the latter is Obinna Iyiegbu’s nickname, while he was recently handed the latter as the king of lavishness (pardon my English).

Before the third quarter of this year, Cubana was the quiet owner of nightlife business, Cubana Nightclub – although he was flamboyant among socialites, his popularity wasn’t national.

But in July, Cubana burst out of that regional box to become an household name after throwing what has been described as “lavish” burial for his mother,

Bundles of cash were flying and littering the ground in Oba, Anambra State, where the burial was held – you might wonder where the 45-year-old made his wealth from – Cubana Group. 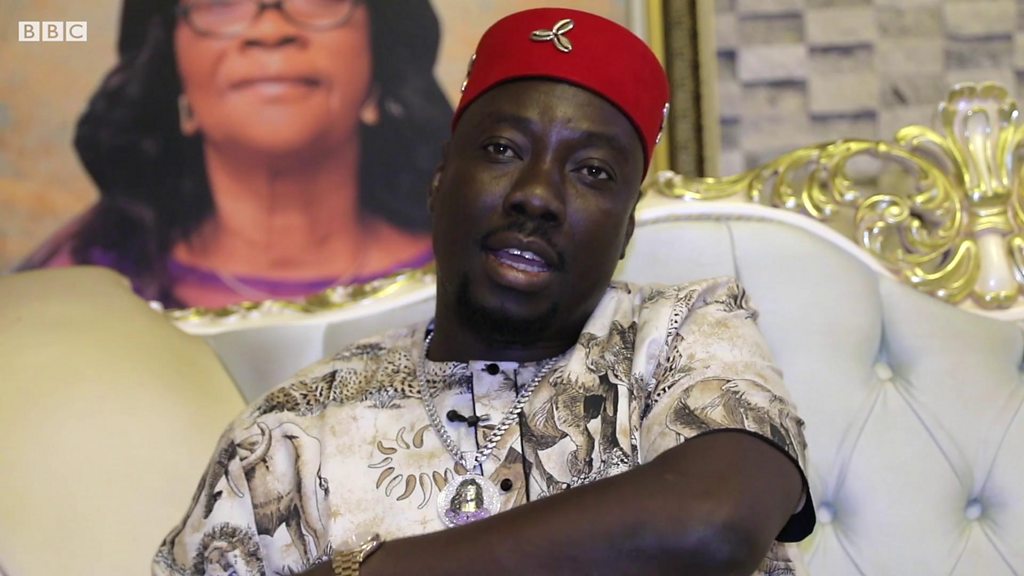 The group consists of Ibiza Club in Abuja, Cubana Night Clubs in Lagos, and Gustavo Cubana in Enugu. But his portfolio doesn’t end there, as he’s also into real estate and hotel business.

In a BBC report, Cubana is said to be worth N39.54 billion ($96 million) thanks to his hospitality and real estate business.

He claims to have provided N3 million each for 53 uneducated Oba boys in 2017, stating that 38 are now billionaires (in naira, as he’s yet to be a billion-dollar businessman), while the rest are millionaires.

Cubana drives around town in a family-sized Sport Utility Vehicle worth about N36.6 million (his wife also owns a similar brand), Mercedes Benz 4matic S40 valued at N38 million, and a Range Rover of N38 million, as well as a Rolls Royce Phantom that cost over N176 million.

Top Three Nigerian Billionaires Hit $23.1 billion as One of Them Drops Out

Sadly, Folorunsho Alakija has dropped out from the billionaire list of Forbes, but Nigeria still has three representatives flying the country’s flag.

Aliko Dangote, Mike Adenuga, Rabiu Abdulsamad, remain on the list, while the latter has enjoyed more growth in his fortune.

The three billionaires are worth $23.1 billion as of August 18, 2021, but only Dangote has remained the richest African in the last decade.