Tragedy struck n Monday, November 1, when a 21-storey building, one of three luxury towers in the Ikoyi area of Lagos collapsed

As the rescue and evacuation mission continues, an APC chieftain, Bola Tinubu, has visited the site of the collapse

Tinubu was spotted in photos with the governors of Lagos and Nasarawa states, Babajide Sanwo-Olu and Abdullahi Sule respectively

Asiwaju Bola Tinubu, a chieftain of the All Progressives Congress (APC) has paid a visit to the Ikoyi Building collapse site in Lagos state.

Tinubu who visited on Saturday, November 6, was accompanied by the Lagos state governor, Babajide Sanwo-Olu, and that of Nasarawa state, Abdullahi Sule. 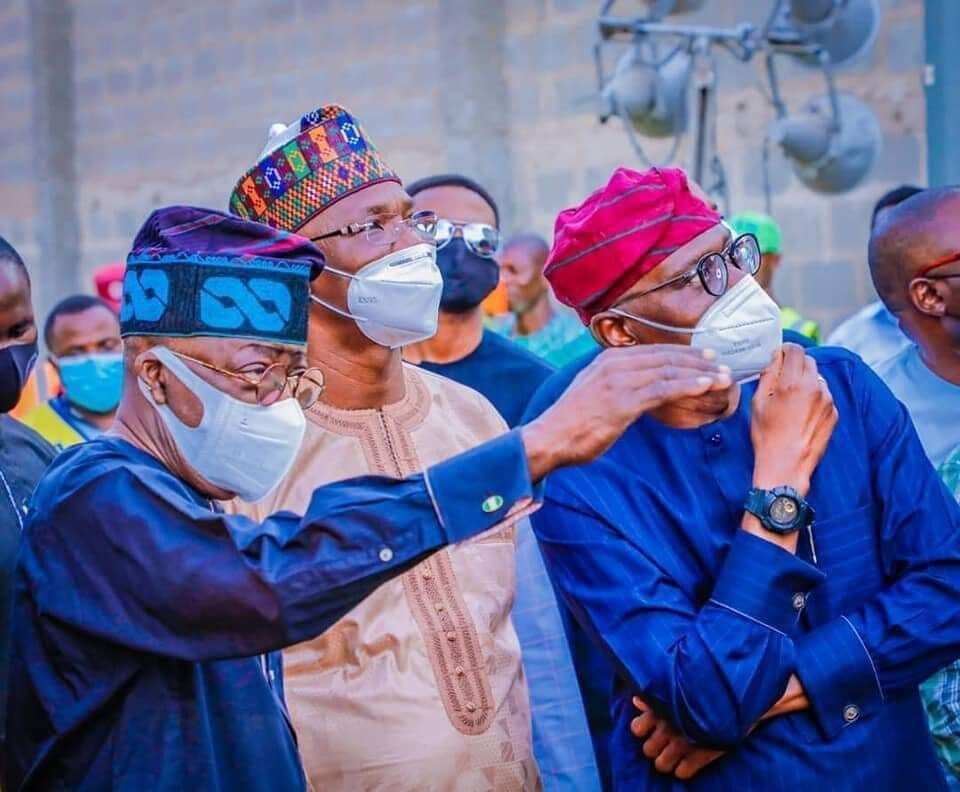 Photos of the APC chieftains at the site were shared on the Facebook page of Tinubu Support Group – TSG. In the photos, Tinubu who was dressed in traditional attire and his signature cap was seen having a discussion with the governors and some other men.

The tragic collapse of the Ikoyi building On Monday, November 1, a 21-storey building, one of three luxury towers, located on Gerrard Road in the Ikoyi area of Lagos collapsed, killing many and trapping others in its rubble. Since the collapse of the building, the National Emergency Management Agency (NEMA) alongside many sister agencies have been working round the clock to ensure that victims under the debris are evacuated.

While the evacuation and rescue mission continues, the number of fatalities has been put at 42 by the state government, while the number of survivors stands at 9. Developer’s body recovered Femi Osibona, Chief Executive Officer of Fourscore Homes Limited, the company in charge of the collapsed building was not spared as he also lost his life.

After days of continuous search and rescue operations, Osibona’s body was eventually found on Thursday, November 4.

Governor Sanwo-Olu disclosed that it was becoming extremely difficult to rescue any more victims alive at the Ikoyi building collapse site.

He stated that the process of clearing the rubble to create more space has begun. According to him, the work at the collapsed building site has reached the phase where using earth-moving equipment is becoming very difficult.