The popular actress hosted a talk-of-the town final burial ceremony for her late mother on her death anniversary.

A number of colleagues in the entertainment industry, particularly from the movie industry, showed love and support to Iyabo Ojo as they graced the occasion.

Photos and videos have made the rounds online from the special event and many of those present made sure to appear their best in various aso-ebi styles sewn from the chosen fabric for the day.

The signature colour for the event was gold and blue and many celebrities turned up in their lovely outfits to mark the late Olubunmi Fetuga’s lifetime.

The event was held in a beautifully decorated hall in a choice area in Lagos state.

See the video of the hall below:

See some clips from the star-studded event below:

Nollywood actress Iyabo Ojo is finally sending her late mum home in style and she is received an outpour of love from friends and industry colleagues. 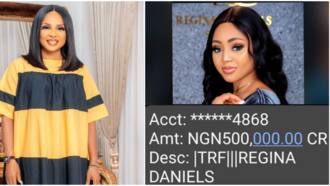 The actress who marked her late mum’s one year death anniversary recently took to her Instagram page with several screenshots showing bank transactions.

Just like Davido got money for his birthday, the actress was also given N100k from several friends and well-wishers.

Movie stars Omowunmi Dada and Moyo Lawal were among those who sent N100k to Iyabo.