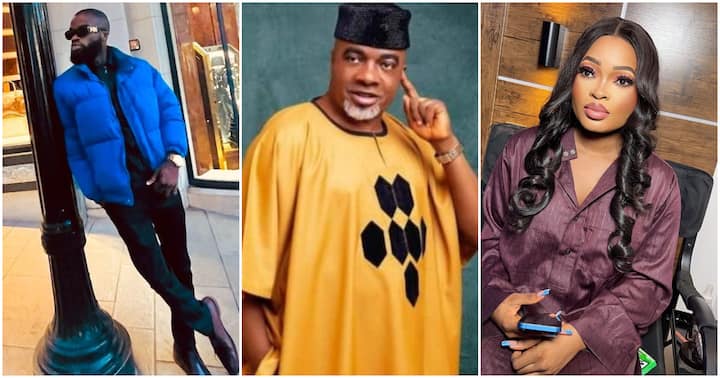 For most Nollywood actresses, they make it clear that they are shouldering their motherhood responsibilities while most of their male counterparts just show their Nollywood side of life.

Some of these men however behind the glitz and glamorous lifestyle are great parents who are doing great jobs with raising their beautiful kids.

Some of these kids get to school and live abroad while their fathers work in Nigeria from one location to the other to make ends meet.

One of such fathers is well-respected veteran actor and filmmaker Ebun Oloyede popularly known as Olaiya Igwe.

A father to six grown-up kids both home and abroad, Olaiya Igwe has put in his money, time, and efforts into being the great father that he has been.

Legit.ng brings you this heartwarming piece as we showcase the actor’s kids in no particular order.

Rildwan is Olaiya Igwe’s first son, based in Atlanta in the United States. The actor is fondly called Baba Ridwan.

Photo of the young man suggests he is a down to earth individual with a great fashion sense.

Olaiya is proud of his child and doesn’t hesitate to flaunt him.

“So much resemblance”: Video emerges of K1’s lookalike son who talks and sings like him, sparks reactions

This is one of the actor’s three beautiful daughters. The young lady is a final year student at Lagos State University (LASU).

Zainob is a beautiful and brilliant young lady and she seems to be the fairest of the bunch.

The young lady also looks like a fashionista and does not play with her looks.

Olaiya Igwe’s baby boy who is his last child, Fuad is a student in the UK. Despite being the actor’s baby, the young man is all grown up.

Fuad sports dreadlocks and shares a faint resemblance with his popular father.

Olaiya is fond of the boy and lovingly refers to him as ‘my baby boy’.

Olumide is Olaiya’s second child and of all his children, shares a striking resemblance with the actor.

The distinct difference between father and son is the fact that while the actor carries huge tribal marks, none of his children have it.

Olumide is a younger and more handsome version of his dear father.

Rukayat seems to be a daddy’s girl and she is another of the actor’s three daughters. The young lady finished from private University, Crescent in Ogun state.

Omoyemi also shares a faint resemblance to her father who is clearly proud of her.

The actor also makes sure to show up for important functions regarding his children as he shared photos from Rukayat’s convocation ceremony.

Bola is also one of the actor’s beautiful daughters who is also based in Nigeria just like most of her siblings.

Bola seems to be be the eldest of the actor’s daughter and she is also doing well for herself.

So far, none of Olaiya’s kids has ventured into Nollywood. Only time will tell if any of them is willing to walk in his shoes.

A lover of education who has made sure his kids got the best, Olaiya in a brief chat with Legit.ng revealed that he has decided to go to school himself. The filmmaker is currently a student at Crescent university, Nigeria,